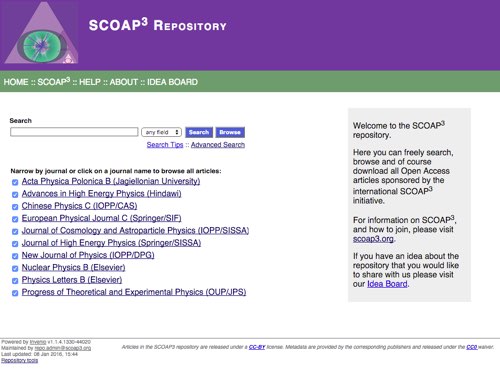 The Sponsoring Consortium for Open Access Publishing in Particle Physics (SCOAP3) started its second year of operation and celebrates the publication of the first 5,000 articles. More than 18,000 scientists from 86 countries have benefited from this Open Access initiative, publishing articles at no direct costs. All these Open Access articles have appeared in high […]

Video and Slides of the SCOAP3 Webinar & Forum available

SCOAP3 held a Webinar on November 18, 2014 to outline the achievements to date, discuss the status of the initiative and its future plans. A recording of the webinar is now available at http://scoap3.org/webinar2014. The video and the accompanying slides provide supporting information to libraries, funding agencies and publishers on General introduction and current status […]

SCOAP3 invites you to a webinar on November 18, 2014 to outline the achievements to date, discuss the status of the initiative and its future plans. This webinar is delivered in English and is targeted to both librarians and interested parties in the research community. It will be of particular interest to members of institutions participating in SCOAP3 as […]

Last week SCOAP3 marked the publication of its 3’333rd article, and is now hosting an online conversation on November 18th to discuss its first months of operation. Starting January 2014, SCOAP3 has supported publication of Open Access articles in high-quality peer-reviewed journals in the field of high-energy physics. Articles copyright stays with the authors and […]

The SCOAP3 repository hosts Open Access articles published under the SCOAP3 initiative. It is built on Open Source software and is now open for the community to harvest content through OAI-PMH feeds. It has been recently featured at the Open Repository 2014 conference. The SCOAP3 initiative has converted to Open Access the majority of the literature in High-Energy […]

July 2nd, 2014 Two thousand Open Access articles have been published with SCOAP3 funding since January 2014 in 10 journals from 11 publishers and learned societies. These articles are released under a CC-BY license, and openly accessible on publishers websites. In addition, articles are also immediately available on the SCOAP3 repository at repo.scoap3.org in several formats, including PDF/A and […]

January 28th 2014 The first Open Access articles sponsored by the SCOAP3 international initiative are now available. Almost 400 articles have already appeared in the first three weeks of 2014 in the journals of participating publishers The first 2014 issues of  four large High-Energy Physics journals have fully ‘flipped’ to Open Access; High-Energy-Physics content in two […]

[From a CERN Press Release] Geneva 5 December 2013. After intense preparations and consensus building, CERN[1] has today confirmed that the SCOAP3 Open Access publishing initiative will start on 1 January 2014. With the support of partners in 24 countries[2], a vast fraction of scientific articles in the field of High-Energy Physics will become Open […]

The SCOAP3 model is built on redirecting funds currently used to pay for subscriptions to participating journals to support their converstion to Open Access, as well as to cover APCs in existing Open Access journals. Our global network of National Contact Points is now moving the process ahead at full speed. In the last few […]